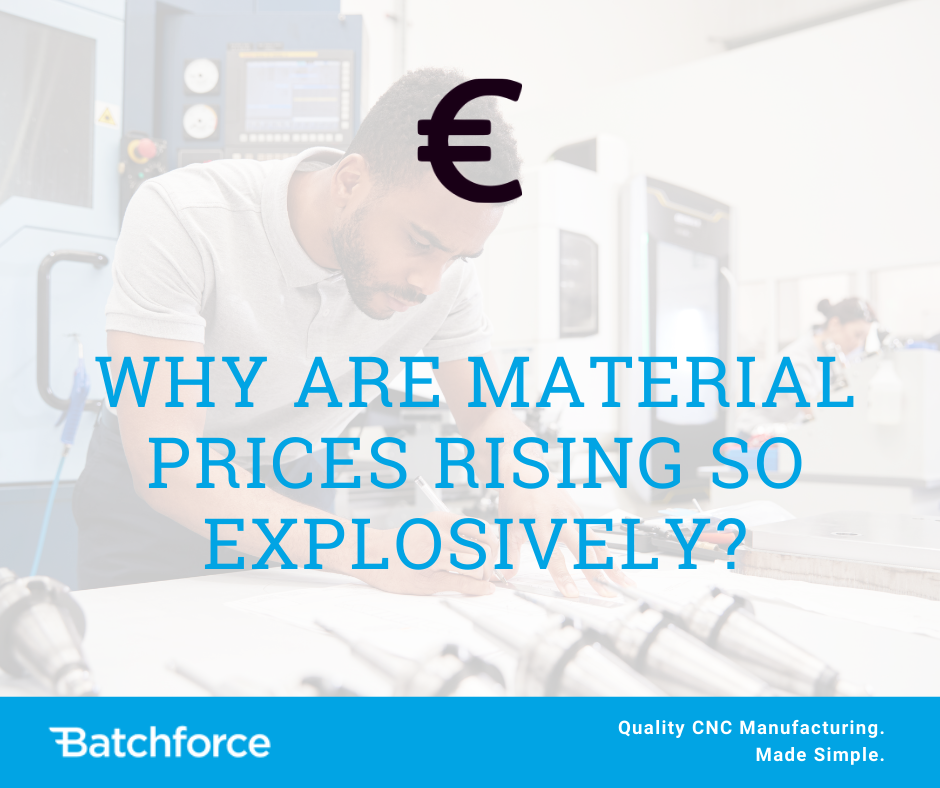 Why are material prices rising so explosively?

Material prices have risen explosively in recent months and have now more than doubled compared to mid-2020. Inquiries with various material suppliers teach us why and at the same time indicate that prices may be even higher.

The above graph has been placed in the StaalJournaal, published by steel supplier NovioStaal, which shows the development of the basic (daily) prices for hot-rolled steel coils since July 2020. These are specifically daily prices and not prices for 3 -month contracts or semi-annual contracts, etc.

How did this price explosion originate?

This is not easy to explain, because material prices are cyclical and various factors can influence their development. Before the Covid-19 pandemic started in late 2019, the materials market was already boisterous. This turbulence stems from previous years of low import prices. This was the reason for the European Union to introduce the so-called Safeguard import-restricting measures.

The turbulence also became visible when steel company ArcelorMittal issued a forecast in November 2019 that expected steel consumption would decrease to 1%, and in Europe by as much as 3%. The automotive industry, in particular, a major European steel processor, experienced major problems and material prices were under enormous pressure. The basic price for hot-rolled coils was around € 440 per ton in that period. At the beginning of 2020, material prices were already adjusted upwards, due to higher import prices. For example, in January 2020, prices were quoted between € 460-490 per ton.

The balance between supply and demand was somewhat restored as a number of large factories, including ArcerlorMittal in Spain, switched to a temporary closure of production.

And then came Covid-19

In mid-February-March 2020, Covid-19 came with enormous consequences for the European economy. The hard lockdowns in various European countries ensured that production was further limited and even stopped completely because suppliers were not allowed to produce or parts could not / were not allowed to be transported. Automotive manufacturers were no longer supplied, staff were at home due to illness or duty to work from home, which in turn had an effect on the planned purchase of steel products.

Steelmakers also faced shifts and even cancellations of pending orders. As a result, even more, production locations, such as blast furnaces, were shut down. Many companies speculated that material prices would fall and that the same materials could later be purchased for a lower price. Prices, however, remained stable and steel mills ensure that supply and demand were reasonably balanced by means of the temporary production stops. They even announced that they wanted to increase the basic daily price to € 500 for new assignments. In this sense they were ahead of the curve, certainly because the recovery in China was faster and stronger than expected, import prices were stable to slightly rising and delivery times for European rolling mills were up to 10-12 weeks.

China’s recovery led to an increase in material demand and therefore also in raw materials such as scrap, oil and iron ore, which became a lot more expensive.

Recovery of the economy

In addition, China suddenly turned from a traditional steel exporter into a net steel importer. When the economy started to recover slowly in Q2 in Europe and the US, consumers had to cover themselves for materials again. Transport to and from Asia turned out to be a major problem, due to the great burden that the recovery of the Chinese economy placed on sea transport. Moreover, ordering material in Asia meant a delivery time of 3-4 months and many consumers did not have this time to wait, because manufacturers of transport equipment, in particular, noticed a rapidly recovering demand and therefore had to obtain material quickly.

Ironically, according to NovioStaal, the revival in the European automotive sector was mainly caused by a large demand for more expensive makes of cars from China and not from a domestic need. In Europe, car sales plummeted in the 1st and 2nd quarters, but the effects of the Corona virus were also noticeable in other industries. In the Netherlands, the nitrogen crisis was added to that. While steel prices still seemed stable in March 2020, they fell in the following months. In May we recorded around € 440 per tonne for hot rolled coils and in June that had dropped to around € 410.

Commodity prices rose sharply in the second quarter: iron ore, for example, rose above $ 100 per ton, and is now above $ 170. 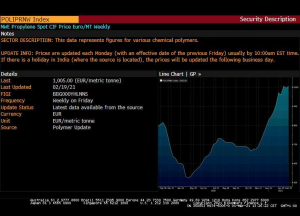 Prices for polymers have also risen sharply, from approximately € 500 per ton to above € 1000. This is therefore a doubling in barely a year. Increases are also due to the great uncertainties about the future stock of various products. ThyssenKrupp has been looking for a partner for some time, especially now that the attempt by Tata Steel for the European branch of the German concern was rejected by the EU. At the end of 2020, it turned out that another large producer, Liberty Steel Group, had run into liquidity problems, as a result of which suppliers of, among other things, hot-rolled coils stopped their supplies. As a result, they could not produce as planned and subsequently report to their customers that the agreed contract prices would no longer be respected due to strongly changed raw material prices. Contracts, therefore, had to be renegotiated before buyers would receive the material.

At that time, a few products, such as galvanized coils, started to develop scarcely. During that period, several steel mills announced new increases. The Indian Tata Group had previously decided to leave Europe completely, which, for example, made the future of Tata Netherlands very unclear. An attempt to take over the factory in IJmuiden by the Swedish SSAB failed in January 2021. Hungarian Dunaferr ran into financial difficulties during the 1st quarter of 2021 and it is still unclear what the future for this factory looks like.

Even in Italy, there is still no clear picture of the outlook for the ILVA steel plant in Taranto. Although ArcelorMittal has taken over this factory together with the Italian government, the plans to increase production yields have still not been successful. In addition, a part of the crude steel production is in danger of having to be closed due to high environmental requirements by the local government. There is a lawsuit about this, which will be announced in May. All in all, therefore, European production capacities as a whole are unlikely to be sufficient to adequately meet steel needs within the EU.

The current scarcity on the market occurs in the products hot rolled, cold rolled and Sendzimir galvanized steel coils. Most European factories claim to have their lines fully booked through September. Two German factories deliver less tonnage of hot-rolled than usual in Q3 and another large producer reports a delivery time of October or 6 months after the order date. This means that a reduction in scarcity does not seem obvious in the near future. Due to the prevailing scarcity, the current long delivery times, the little competition from import material and the high raw material prices, ArcelorMittal raised prices three times in March (with a total of € 150 per tonne). The official basic price for hot-rolled coils is now € 900 per ton.

A new policy has been implemented in China whereby less crude steel may be produced in various provinces for environmental reasons. China wants to reduce CO2 emissions by 2025 at the latest. The intention is to reduce steel production by approximately 22 million tons by 2021, an amount that will be at the expense of the available export volumes. In order to still adequately meet the need for rolled steel, measures to stimulate exports are therefore being phased out. The country exported almost 100 million tons of steel in 2018 and that has already decreased to less than 60 million tons by 2020. China will therefore possibly start exporting less steel, import more scrap for crude steel production based on electric furnaces (EAF) and import more rolled steel.

Another big question mark is whether the European import duties will be maintained or will be changed. Although there are requests from various sectors in the US to the Biden government to phase out import tariffs on steel, there are no signs yet that the US will change its import policy. In that context, unilateral action by Europe is not obvious.

Are the prices getting even higher?

In a nutshell: The economic developments in the US and China seem brighter than here in Europe and, moreover, enormous amounts of money are being pumped into the economy by governments there. Forecasts of economic growth look positive at 6% growth or more. For the US, this would be the largest increase since 1974. It is therefore expected that the demand for steel will remain high, which also makes it plausible that raw material prices will remain high for the time being, or perhaps even higher.

Do you have questions about the status of your order and have you already received the track & trace code? Then wait until three days after the shipment date. If you still do not have your package, please contact us at [email protected] or by telephone at +31 45 369 05 46.